In this gallery of owls, we have 57 free PNG images with transparent background.

Owls are birds from the order Strigiformes, which includes about 200 species of mostly solitary and nocturnal birds of prey typified by an upright stance, a large, broad head, binocular vision, binaural hearing, sharp talons, and feathers adapted for silent flight. Exceptions include the diurnal northern hawk-owl and the gregarious burrowing owl.
Owls hunt mostly small mammals, insects, and other birds, although a few species specialize in hunting fish. They are found in all regions of the Earth except Antarctica and some remote islands.
Owls are divided into two families: the Strigidae family of true (or typical) owls; and the Tytonidae family of barn-owls.
Owls possess large, forward-facing eyes and ear-holes, a hawk-like beak, a flat face, and usually a conspicuous circle of feathers, a facial disc, around each eye. The feathers making up this disc can be adjusted to sharply focus sounds from varying distances onto the owls' asymmetrically placed ear cavities. Most birds of prey have eyes on the sides of their heads, but the stereoscopic nature of the owl's forward-facing eyes permits the greater sense of depth perception necessary for low-light hunting. Although owls have binocular vision, their large eyes are fixed in their sockets—as are those of most other birds—so they must turn their entire heads to change views. As owls are farsighted, they are unable to clearly see anything within a few centimeters of their eyes. Caught prey can be felt by owls with the use of filoplumes—hairlike feathers on the beak and feet that act as "feelers". Their far vision, particularly in low light, is exceptionally good. 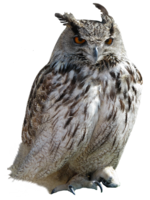 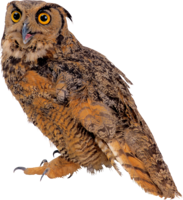 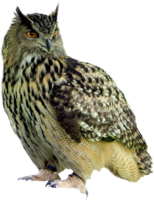 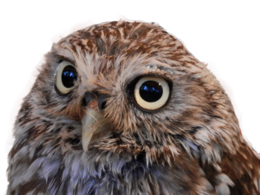 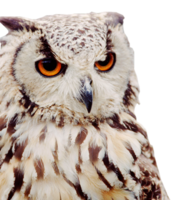